Debunking the myth that millimeter wavelengths aren’t viable for 5G

One of the big reveals when the 5G standards were released was that it would expand the frequencies used by wireless carriers well into the millimeter-wave (mmWave) spectrum, orders of magnitude higher in frequency than the industry has ever used before. This spectral region has always been sparsely populated because of its challenging propagation characteristics, but for consumers it offers more than its lower-frequency counterparts: immense bandwidth and low latency, the metrics that make video, AR, VR, and all other real-time applications possible.

However, the difficulty in harnessing this performance has led some to pronounce that operating in this region will be ruinously expensive for service providers, requiring immense numbers of small-cell base stations to compensate for its inherent limitations (Figure 1). The latest to make this case was Mike Dano, editorial director, 5G and Mobile Strategies in his LightReading article “The age of mmWave sputters to a dusty death”. 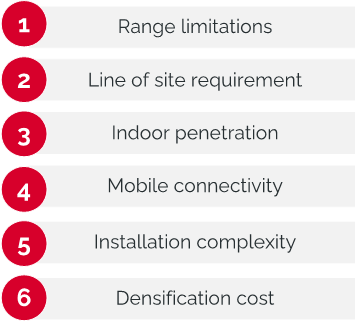 There is some merit to some of his arguments, assuming that current network architectures are employed, but Movandi has demonstrated that the use of the mmWave can be achieved cost-effectively through the use of smart networked repeaters with cloud control and AI, low power consumption, beamforming, and other technologies. Not only does this approach simplify deployment, but it also improves the end-user experience, provides coverage virtually anywhere indoors, outdoors or while mobile, and can reduce capital expenditures and the total cost of ownership by more than 40%.

While 4G and its predecessors have traditionally expanded capacity and coverage primarily by adding more and more base stations, which historically have had limited capacity. 5G base stations have significantly more capacity but with mmWave limited range. The result has been that the mmWave base capacity is not fully utilized and service providers have needed to add many more expensive gNodeBs (gNB) then required. The Movandi approach changes this paradigm, reducing the number of very expensive next-generation gNB radios required while using more cost-effective smart repeaters to reach outdoors and indoors areas that are resistant to millimeter-wave signals. Movandi BeamXR powered smart repeaters with their flexible form factors and low power consumption can be placed virtually anywhere, from light poles to ceilings in office buildings and throughout stadiums and other large venues using simple mounting hardware.  For this reason, Verizon Wireless has already adopted Movandi powered smart repeaters and is beginning deployment nationwide.

The Movandi architecture is based on patented 5G mmWave chipsets, RF power amplifiers, MIMO antennas, BeamXR smart repeater modules, and BeamX algorithms and software. It provides mesh networking capability with redundant and dynamic routing and will soon provide control via cloud-based data centers with AI to balance and optimize network routing based on traffic and quality of connectivity. These innovations reduce the number of gNodeBs through load-balancing traffic across networks to provide continuous connectivity, even in moving vehicles.

BeamX software-defined beam networking (SDBN) mesh-networking capability expands coverage to difficult-to-reach locations and enhances the end-user experience while maintaining a high MIMO rank. The gNodeB signals are received by a Movandi BeamXR smart repeater donor unit and then meshed with up to four additional server units (more in the future) via wireless or wired fiber or coaxial cable. The donor units can be placed at locations with high MIMO rank to maximize signal-to-noise ratio and traffic capacity.

The solution also significantly reduces deployment complexity and ongoing maintenance, and as they have optimized form factors that consume little power, they can help solve the onerous problems associated with permitting and legal fees. In short, the low cost (about $3,000) of Movandi BeamXR powered smart repeaters lets wireless carriers expand and enhance millimeter-wave coverage to places where using traditional means would be far too expensive. 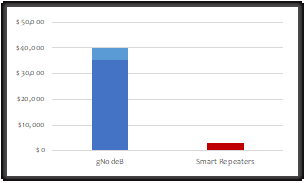 To determine how well the Movandi approach might work, Joe Madden, founder and chief analyst at Mobile Experts, analyzed whether mmWave repeaters can save money in a dense urban area and if they can save substantial deployment costs. As its baseline, the study examined a neighborhood in Dallas covering 1.4 square miles with a high density of sub-6 GHz traffic.

During the peak hour, this area currently generates about 31 Gb/s of traffic, but by January 2024, it is expected to nearly double to 61 Gb/s. After comparing three deployment scenarios, he concluded that rather than employing large numbers of gNodeB radios, a mesh of repeaters can be an effective way to satisfy both coverage and capacity. 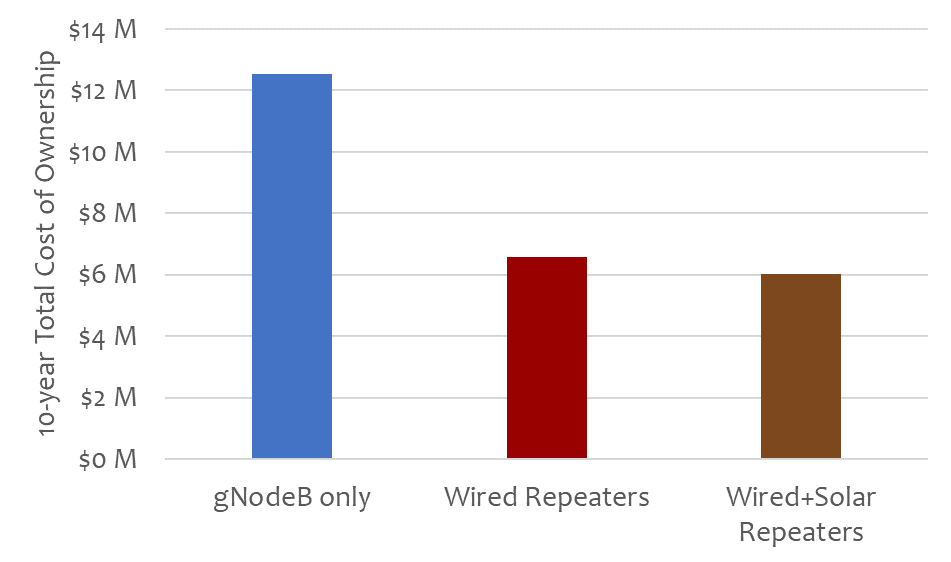 The results of this work are contained in a white paper entitled “Repeaters cut 5G mmWave cost in half” and can be downloaded here.

What’s required is a new network design model in which smart repeaters, advanced software and algorithms, digital beamforming, and other techniques allow millimeter-wave signals to permeate RF-restrictive environments without dramatically increasing the number of small-cell base stations. This is precisely what Movandi has achieved with its patented mmWave silicon solutions and advanced software-based virtualized platform.

Movandi and Doosan are collaborating on antenna modules supporting leading Korean carriers and the frequency bands of U.S./Japanese mobile carriers.

Movandi and Ubicquia have joined forces to deliver smart repeaters that can be mounted easily and cost-effectively on LED streetlights, expanding mmWave coverage in urban areas and reducing TCO by 80%.

The gNodeB or small cell signals are received by a Movandi BeamXR repeater donor unit (DU) and then meshed with up to four additional server units through wireless or wired fiber or coaxial cable. The donor units can be placed at locations with high MIMO rank to maximize signal-to-noise ratio (SNR) and traffic capacity.

SDBN management software reduces the complexity of beam search and refinement at the network repeater by establishing mesh links among multiple repeaters.  The software is also responsible for optimizing the relay radiation pattern to maximize the capacity and performance of user equipment. SDBN software actively monitors the communication link quality, mitigates interference and follows dynamic changes of the communication channel, applying machine learning to model the behavior and control of the mesh network.

Cost-effective, scalable, small, lightweight and easy to install, BeamXR smart repeaters provide an efficient way to extend the range and coverage of gNodeBs and small cells across 5G networks. Unlike base stations or small cells, the smart repeaters can be installed easily on streetlights, lampposts, walls and windows.

A compact, single-box smart repeater based on BeamXR technology allows easy, economical installation and daisy chaining of up to five units using RF signals to enhance coverage flexibility and reduce deployment costs. The smart repeaters enable mmWave signals to be brought indoors from a gNodeB or small cell and then spread to enhance coverage indoors. The repeaters support dense indoor mesh networks, enabling traffic to be dynamically routed based on signal quality, bandwidth, latency and network congestion.

Movandi has tailored its mobile mmWave repeaters as a complete solution and co-designed the RF chipset, DSP functions, beamforming and algorithms. Movandi partnered with Airfide Networks to create the handoff algorithm that enables effective rapid signal transfers, ensuring seamless 5G coverage while vehicles are in motion.

The conventional approach for implementing mmWave networks, which relies on extensive gNodeB and small cell deployments, could cost at least $400 billion globally by 2032. Movandi’s cost-effective approach to smart repeaters turns this paradigm on its head by reinventing the network architecture, dramatically reducing the amount of gNodeBs, small cells and optical fiber required for indoor and outdoor installations. In a recent white paper, “Repeaters Cut 5G mm-Wave Costs in Half,” the respected analyst firm Mobile Experts estimates that smart repeaters powered by BeamXR technology can cut mmWave deployment costs by 52%.

Movandi has demonstrated mmWave deployment can be achieved cost-effectively through the use of smart networked repeaters with AI-based cloud control , beamforming, and other advanced technologies. The Movandi approach not only simplifies deployment, it also improves the end-user experience, amplifies indoor, outdoor and mobile coverage, and significantly reduces capital expenditures and total cost of ownership.

If you want expanded 5G coverage with full capacity, low latency, and faster deployment of low-power solutions with easier resource management, all at a lower cost and higher ROI, contact the Movandi team to learn about our smart repeater reference design platforms.