Today in a press release, we announced the results showing how 5G mmWave can deliver exceptional performance in a moving automobile when Movandi-powered BeamXR smart repeater with Movandi BeamX cloud software control, machine learning and AI are combined.

The test showed that Movandi BeamXR powered smart repeaters significantly enhanced 5G performance 19X compared to national averages and 14X without repeaters (Figure 1). This type of performance will be necessary for broad 5G adoption and many application use cases including trains, buses, automobiles, entertainment and interactive AR / VR and business real-time applications – telemedicine, customer support and video conferencing. Mobile Expert’s Joe Madden, Founder and Analyst, participated in the test and prepared an independent assessment as well. 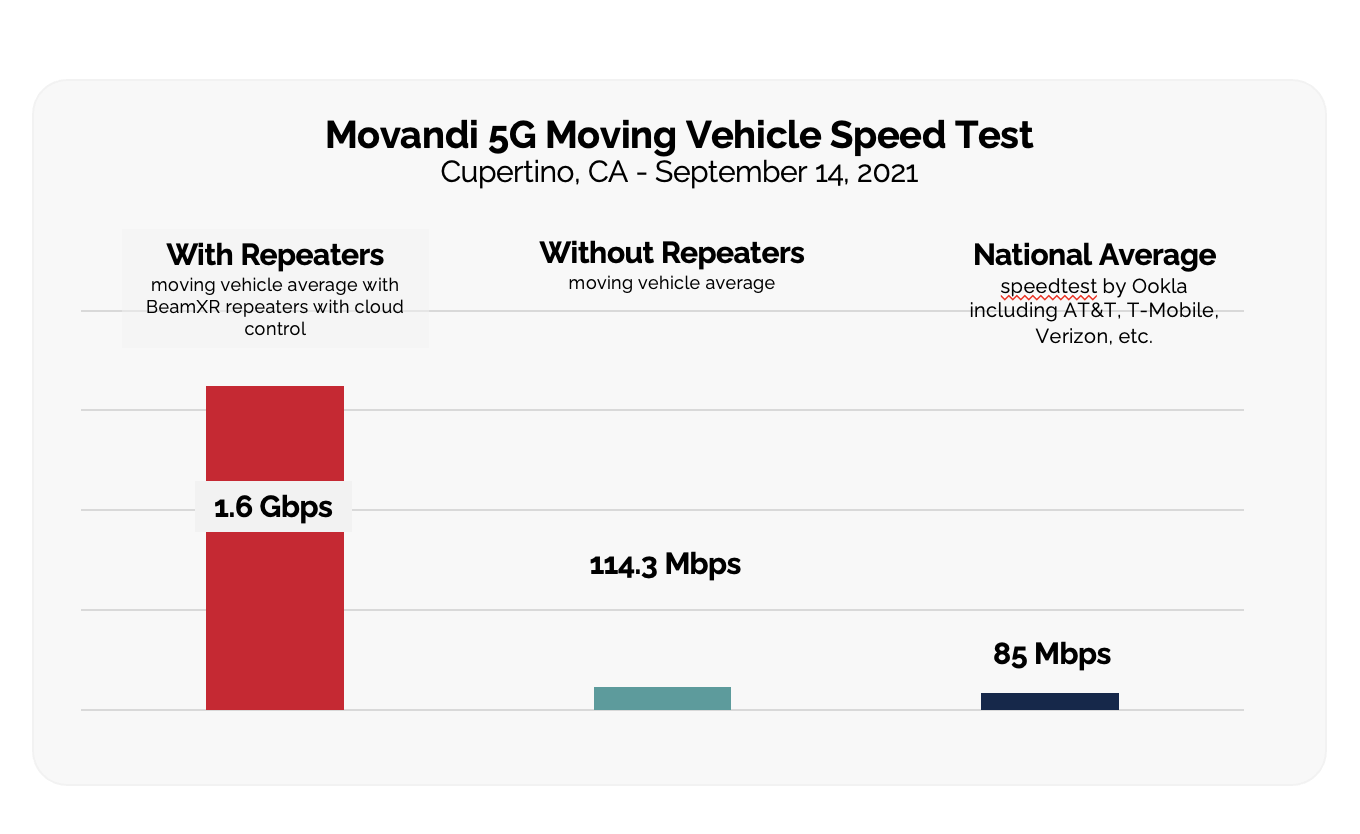 We conducted our own tests, making sure they were fully documented, verifiable, and comprehensive enough to stand up under scrutiny. The test compared performance achievable with and without Movandi’s BeamXR smart repeater solution when operating on Verizon’s Ultra Wideband 28 GHz 5G network.

It is the first such documented test in a moving vehicle, Movandi demonstrates the ability of these high frequencies and cloud intelligence to deliver high quality of service and multi-gigabit per second downlink speeds in difficult mobile environments.

Movandi’s BeamXR mmWave smart repeater is the industry’s first solution designed to mitigate the propagation challenges encountered at that these high frequencies. Beam XR repeaters boost mmWave signals, allowing them extend range and penetrate walls and buildings as well as provide consistent coverage under the varying conditions of both fixed and mobile operation.

The solution is based on Movandi’s CMOS-based MMICs, active phased-array antennas, as well as beamforming and advanced control software and extensive use of cloud-based intelligence provided by machine learning and AI. In a mobile environment, BeamXR repeaters continuously monitor and send GPS location, speed, environmental conditions, gNodeB signal quality, and other factors to the BeamX cloud in real-time. The BeamX cloud control dynamically sends instructions to the vehicle instructing the best gNodeB signal to use.

To perform the test, we chose for the evaluation is a 3 mile (5 km) stretch in Cupertino, Calif., near Apple’s headquarters (Figure 2). Movandi mounted a prototype millimeter-wave repeater behind the windshield in the car and measured downlink and uplink speeds and latency on a smartphone with and without the repeater. It was conducted at an speeds up to of 28 mph using Verizon’s 28-GHz Ultra Wideband network over a 3 mile (5 km) route along DeAnza Boulevard, one of the busiest corridors in Silicon Valley near Apple’s corporate headquarters in Cupertino, Calif.  Along the route, the car passed six gNBs and 24 switching points that handed the signal off to each other.

The smartphones used in the test were Samsung Galaxy S21 and Apple iPhone 12, and speeds were measured using Ookla’s Speedtest app with continuity evaluated by attempting to establish and maintain an HD videoconferencing call.

We used Movandi Beam XR Indoor smart repeaters mounted in the front near the windshield and at the rear window. In a real implementation, we would expect the repeater antennas, radios and chipsets to integrated into the windshield or a rooftop fin similar to today’s satellite radio. We sat in the rear seat holding the phones either on our laps or in front of our faces and all windows were closed. Measurements were made standing still and driving about 20-30 mph along De Anza Boulevard.

2. Movandi BeamXR-enabled repeaters mounted in the front and back of that vehicle 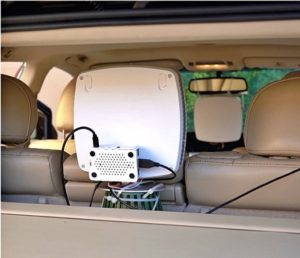 With the car at rest and the repeaters turned off, downlink rates were about 1.9 Gb/s and up to 3.2 Gb/s with link reliability highly dependent on how we held the phones, presumably because of attenuation from our bodies and the glass and steel “cage” presented by the car. At ~ 30 mph, performance was spotty and inconsistent with downlink speeds varying between 86 to 177 Mb/s. See figure 4 for test read-out. Videoconferencing was not possible because the link never remained stable for more than 5 seconds.

We next turned on both repeaters, and while moving, we achieved a maximum of 2.7 Gbps downlink rate, and averaged 1.6 Gpbs downlink rates over the route regardless of where and how the phone was held, and HD video performance using Blue Jeans, Zoom and Webex remained consistent with no glitches or interruptions.

In short, although the Verizon Ultra Wideband mmWave network performed better than the national average for downlink performance while the repeaters were turned off, the use of the Movandi’s BeamXR technology delivered consistent high bandwidth performance at a level that users will expect from a 5G network (Figure 4).

This performance was enabled by the power of BeamX software cloud computing and AI. Traffic data is transmitted over a 4G LTE network to cloud data centers where it is analyzed and adjusted dynamically in real-time to determine the best signal paths and operating parameters, after which it is sent back to the repeaters where the instructions are implemented.

The BeamX cloud intelligence is built on the cumulative data from sent from traffic along the route, and dynamically adjusted based on real-time vehicle and environmental conditions. All of this occurs with the extremely low latency required in the continuously variable environment experienced in mobile operation. The cloud is a key component in this scenario because it allows this computationally complex analysis to be performed externally rather than burdening user equipment that would otherwise rapidly drain its batteries. See figure 5.

The repeaters used in the test were prototypes and obviously too large to be installed within a vehicle. However, as Movandi designs all of its hardware in-house, we have been able to dramatically reduce the size of the BeamXR devices, so that a complete repeater can be realized in a much smaller form factor. This allows them to be mounted not on a car but within its structure, potentially making them standard features once wireless carriers have further deployed their mmWave networks. 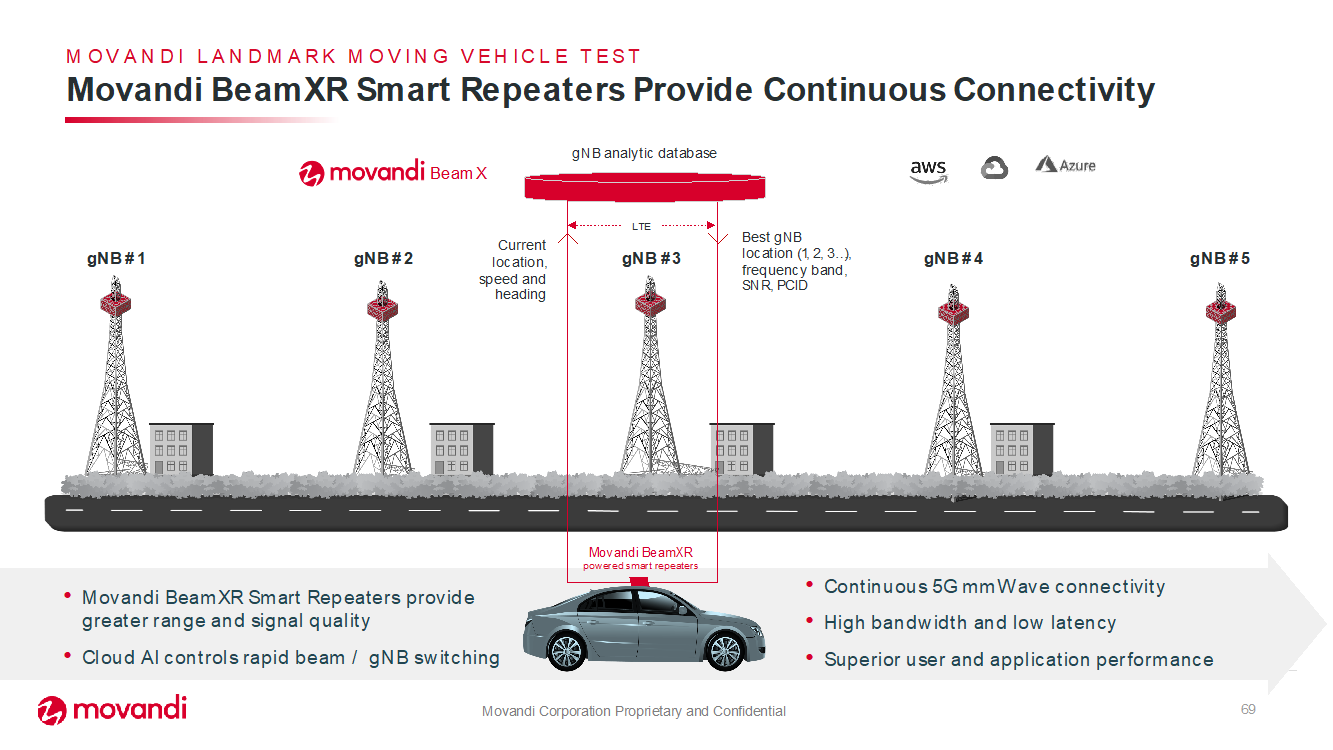